In Spring & Summer 2022 we have opportunities to pass momentous climate policy in both Massachusetts and Rhode Island, and Green Energy Consumers is up to the task. Find out what you can do to help!

Donate to support our work

Recently, nearly 300 supporters wrote to their Senators in support of stronger commitments, including phasing out gas-powered car sales starting in 2030. Stay tuned for other action alerts!

We’re supporting this bill and hoping to see it through to passing this summer. 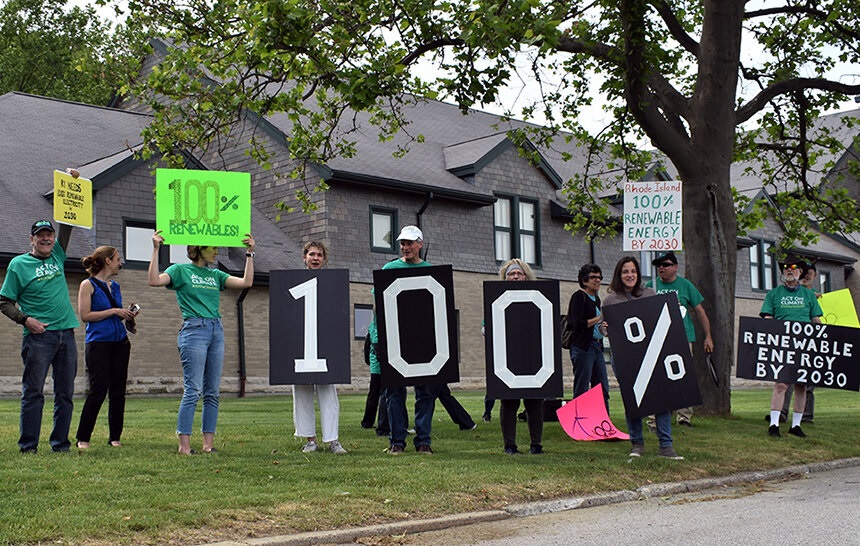 In mid-June, Rhode Island’s General Assembly PASSED legislation that would bring 100% renewable electricity to the whole state by 2033.

The legislation, sponsored by Senate President Dominick Ruggerio and Representative Deb Ruggiero, requires electricity companies to deliver an increasing amount of renewable energy every year until we hit 100% of Rhode Island’s electricity in 2033. This would make Rhode Island the first state in the country to hit this necessary benchmark in the path to net-zero emissions.

The 100% Renewable Energy Standard is the most cost-effective way to reduce emissions in the short-term. And it will make sure electrified transportation and buildings are powered with green electricity. We’re proud to have been a leading voice to pass this legislation, and grateful to our many donors and members who supported us along the way.

There are several EV-focused bills before the Legislature. Legislators want to pass another climate bill before the end of the session, and it’s our job to make sure that bill includes comprehensive language on transportation electrification. We’ve got some ideas.

On April 7th, the MA Senate produced a climate bill with provisions to end the sale of gas guzzlers, invest in greener public transit, incentivize driving an electric car, and build charging networks. We're excited to follow this bill to the signing, making it stronger along the way.

Learn more about the Phasing out Gasoline campaign

3 Climate Policies to Get RI Back on Track for 2030

Getting to 100% Green Electricity: It’s only a matter of when.