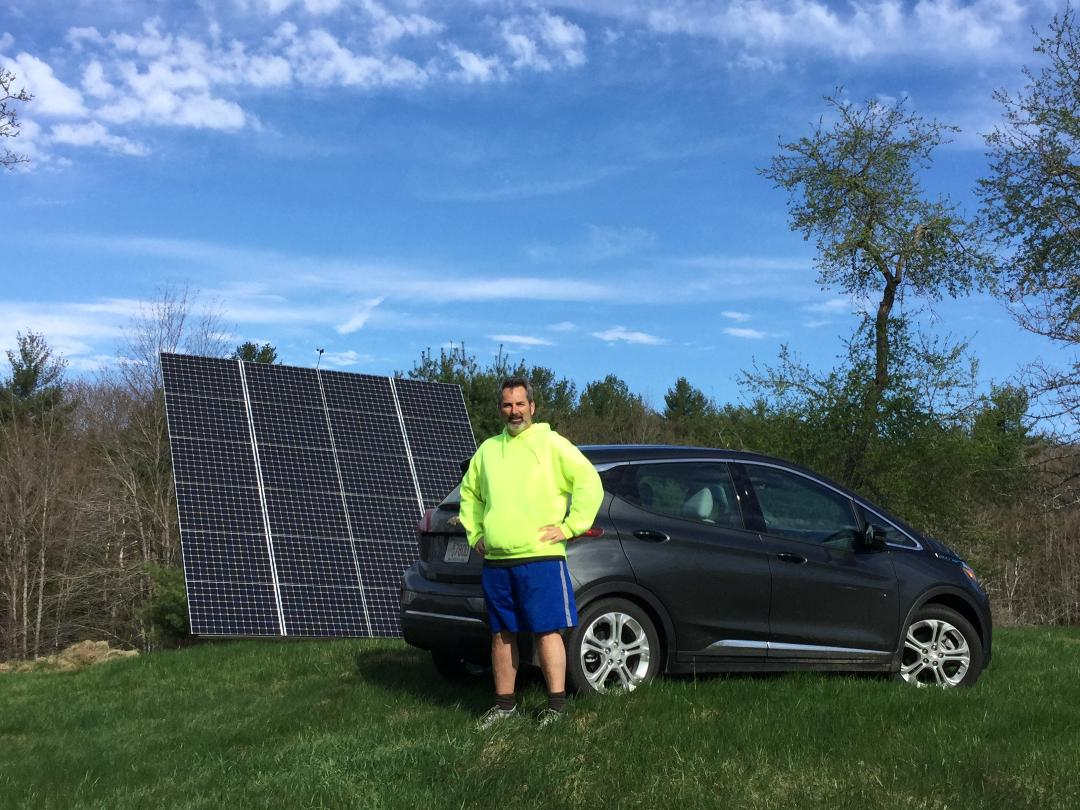 Electric vehicles are a great choice for the environment

EVs are much cleaner than gas-powered cars, which is good news for our climate and for our health.

Impact of gas-powered cars
Benefits of electrifying transportation
EV benefits increase over time
Drive emissions-free now!
But what about the battery?
Lifecycle analysis

The consensus among energy experts is that in order to reduce greenhouse gas emissions sufficiently (80% below 1990 levels by 2050 and 40% by 2030), we must rapidly increase adoption of EVs.

All of these pollutants are responsible for a huge range of health problems, particularly eye, lung, and heart problems, which you can read more about in this blog post.

These climate and health costs add up, not only in terms of human suffering but also in dollars. In 2016, the American Lung Association estimated that the climate and health impacts of burning gasoline in the 10 states they studied cost $1.15/gallon. In 2015 alone, that came to $37 billion of costs related to burning gasoline that nobody paid for at the pump. As climate change worsens, we can only expect those costs to go up.

Switching from a gas-powered car to an electric vehicle has huge environmental and public health benefits. A vehicle running only on electricity has zero tail-pipe emissions. Even if you account for the emissions associated with producing the electricity to charge them, electric vehicles charged with electricity in New England produce far fewer greenhouse gas emissions than vehicles powered by internal combustion engines.

The Union of Concerned Scientists has done the math and has a great EV Emissions Tool on its website. You can plug in your zipcode and any make and model of EV to find out what emissions it would be responsible for, per mile driven.

On average, emissions of different types of EVs in Massachusetts and Rhode Island are (data from UCS' EV Emissions Tool): 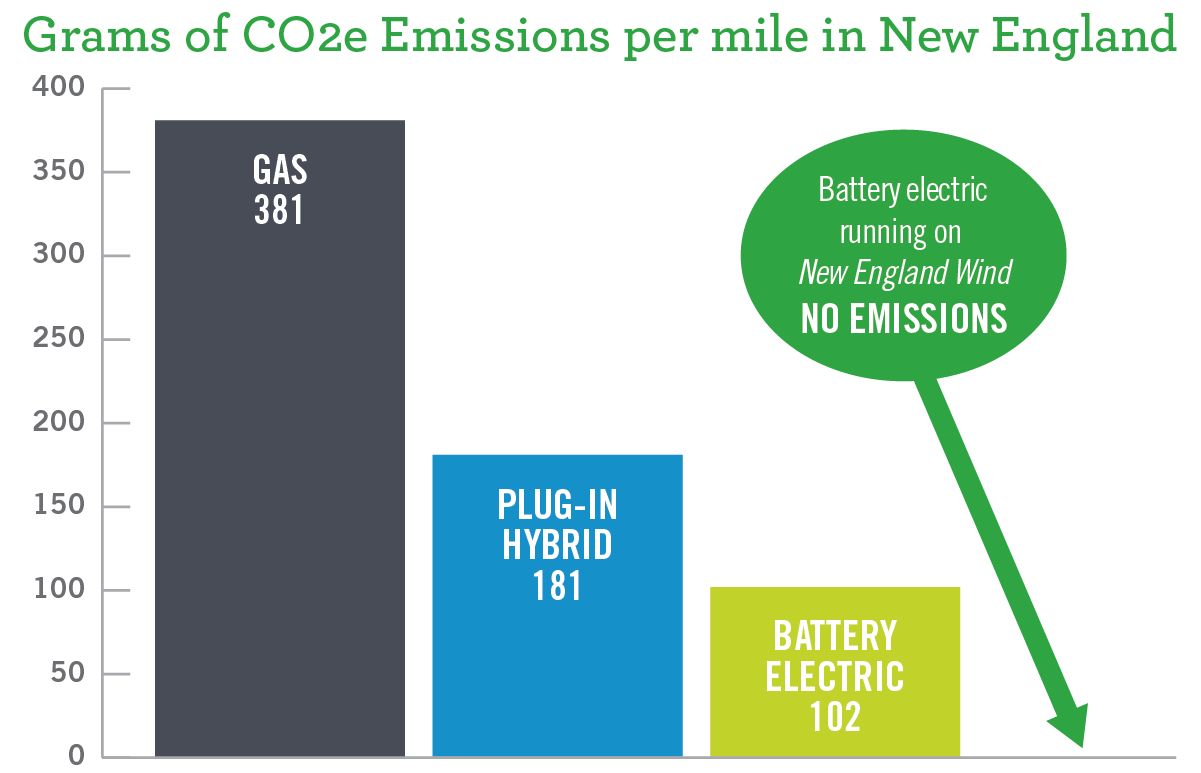 In addition to substantially reducing greenhouse gas emissions, electric vehicles significantly cut down on the pollutants released by gas-powered cars that cause so many public health problems.

In sum, the benefits of electric vehicles are huge: we cannot meet our climate goals without them and they are crucial to bettering our public health. Though our Drive Green program focuses on passenger vehicles, we are strong proponents of electrifying everything, particularly public transportation. 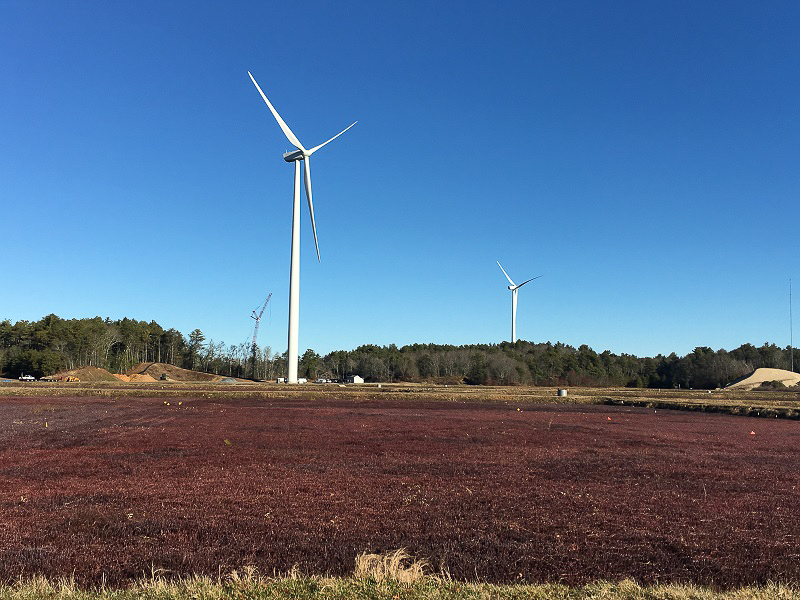 Several reports lay out the importance of electrifying transportation in order to decarbonize the economy.

The environmental benefits of electric vehicles will only get better with time. Why?

Learn more from our blog post, Emissions from Electric Cars Will Decrease Every Year - Isn't that Cool? Here's how.

If you drive an electric vehicle, you can charge it up emissions-free by becoming a member of our green power program! By matching your electricity use with 100% local wind power our Green Powered program, you can drive easy knowing that your transportation is responsible for zero greenhouse gas emissions.

Learn more about driving on the wind!

But what about the battery?

Electric vehicles offer clear greenhouse gas emissions reductions compared to gas-powered cars. However, lithium-ion batteries degrade over time, and at some point, after many years of use, an EV and its battery will need to retire. Many people are rightly concerned about what will happen as more and more used EV lithium-ion batteries are reach the end of their useful lives. We have been following this issue and see that markets are already developing for the beneficial reuse and recycling of spent EV batteries.

In terms of reuse, there are policies and markets developing already for stationary storage using repurposed lithium-ion car batteries. As we add more renewable energy to our electric grid, we will need more stationary storage to provide power when it’s not windy or sunny. We are already seeing the solar industry embrace storage. We anticipate that carmakers will become big players in this market as well.

We can also recycle the metals and other ingredients in the car battery. As with storage, a whole new industry can grow up over time as EVs proliferate.

Imagine buying or leasing an EV today and getting cash back when it’s time to trade it in for a newer model because of the value of the battery for either reuse or recycling! We’re not promising that, but we see it as a strong possibility.

See below for two excellent articles explaining the various ways that the “old EV battery” problem is likely to be solved.

"Where 3 Million Electric Vehicle Batteries Will Go When They Retire"

Article from Bloomberg Businessweek on June 27, 2018 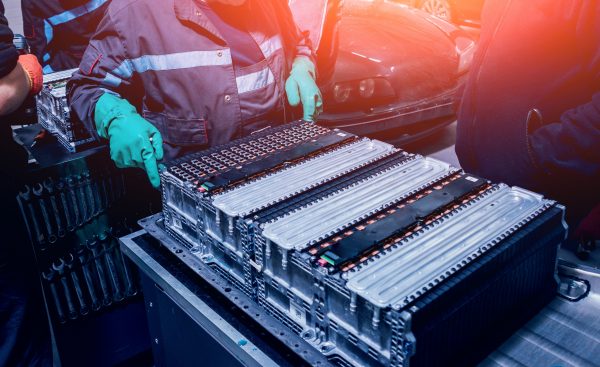 "How Electric Vehicle Batteries Are Reused Or Recycled"

There are emissions associated with the manufacture, use, maintenance, and disposal of all vehicles. How do electric cars compare to gasoline cars over the entirety of their useful lives? Check out this cool video from the Union of Concerned Scientists (UCS) about the lifecycle impacts of an electric car vs. a gas-powered car. Two things to note before you watch:

For more information, you can read UCS' 2015 Cleaner Cars from Cradle to Grave report.

MIT's Trancik Lab developed an awesome tool, Carboncounter, that allows you to compare the greenhouse gas emissions (lifecycle gCO2eq/mile) with the costs (vehicle, fuel, and maintenance) of available vehicle types. Check it out here.

You can compare different vehicle types (internal combustion engines, hybrids, plug-in hybrids, battery-electric vehicles, etc.) or look up where a specific vehicle falls on the spectrum.

Ready to get started?